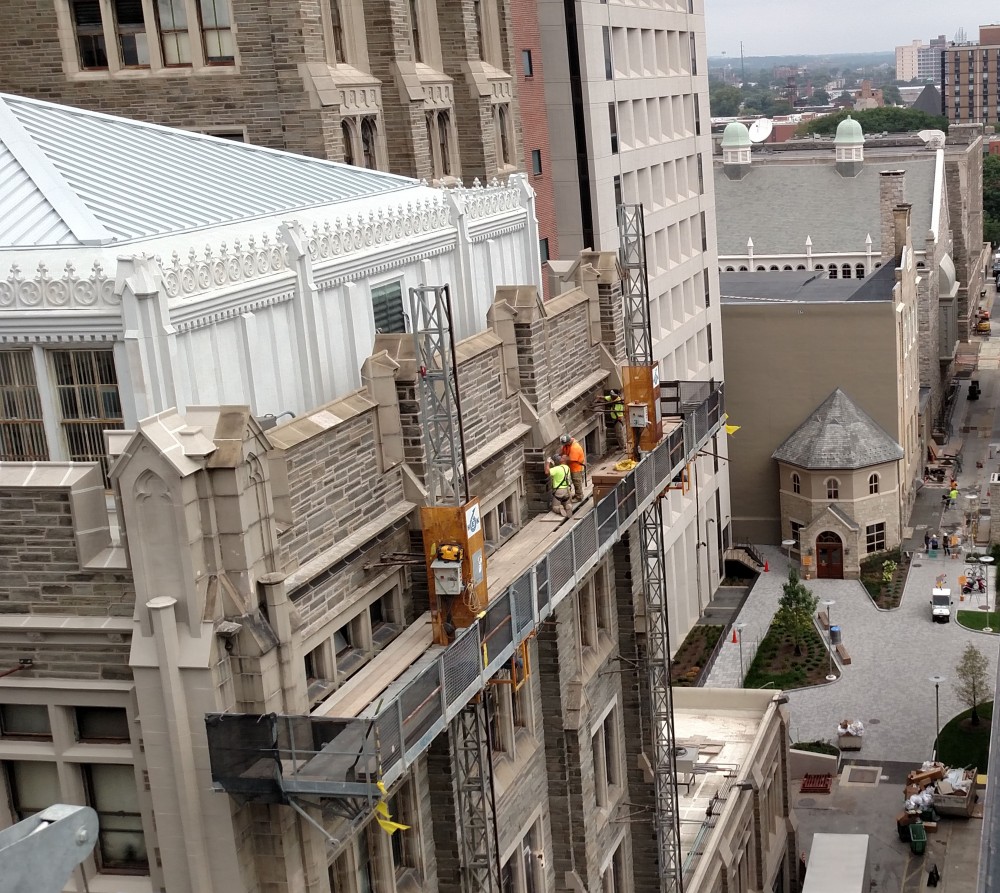 E.P. Guidi is proud to be performing the extensive exterior renovation of Conwell Hall and Carnell Hall at Temple University.  Originally built in the 1920’s (1922 for Conwell, and 1928 for Carnell), these buildings have historical significance specific to the Philadelphia region.  Even though they are not listed on the Register of Historic Places, the University recognized their historic properties and chose to renovate the buildings under the Secretary of the Interior’s Standards for the Treatment of Historic Properties.

Both Conwell Hall (6 stories) and Carnell Hall (12 stories) are built from Wissahickon schist, a variety of metamorphic rock named for Philadelphia’s own Wissahickon Creek, where the stone was first found.  Many historic buildings in our area are built from this distinctive stone, which includes bits of shiny mica and tones of gray, blue, brown and black.  Philadelphia’s stone masons mined the schist by hand due to the fact that, while in the earth, the schist is soft and carvable.  Once the schist is exposed to air, however, it oxidizes and becomes hard and durable.

Both buildings have had various repairs done to their exterior masonry in the past nine decades.  The project scope includes selectively removing older repairs, selective stone replacement, and repointing and repairing the facades, including decorative limestone and terra cotta elements. 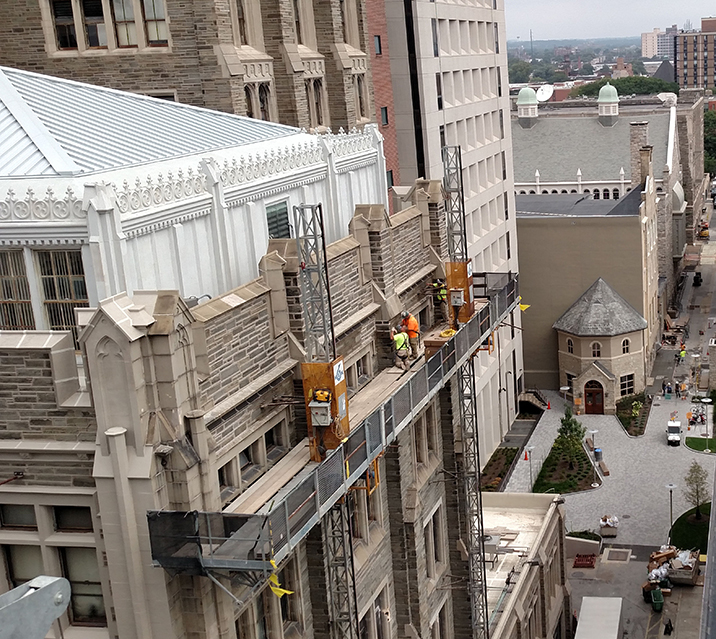 Above: Facade restoration in progress

Also, just as the schist is a regional attribute, so too is the mortar style used for pointing.  Both buildings feature ribbon pointing, the effect of which is a concrete ribbon wrapped around each stone section.  When the stone is laid out in horizontal lines, the ribbon transforms irregular stones into squared-off rectangular shapes, thus effectively creating straight edges where none may exist.  This technique was often used on Philadelphia structures built of Wissahickon schist. 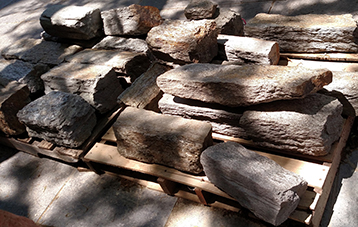 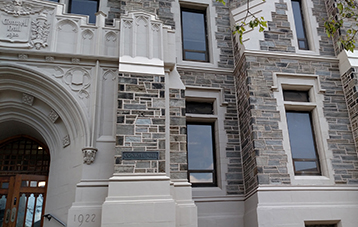 Additionally, of the 670 windows existing in the two Halls, some are the original steel windows which were manufactured by the Pomeroy Company, and some are replacement aluminum windows, which required extensive reconfiguration of the existing interior window head in order to provide full vision with the new window units.  The project scope includes new replacement windows which will fit the correct openings and match the historic nature of the building.  Supplementary interior work includes construction of new soffits at window heads, reconfiguration of ducts and plenums to connect to new louvers, relocation of lighting fixtures where they interfere with new soffits, and painting. 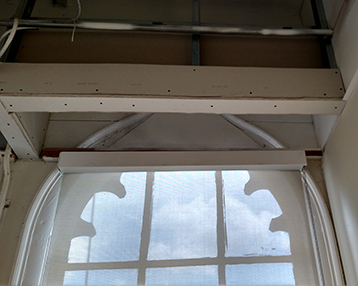 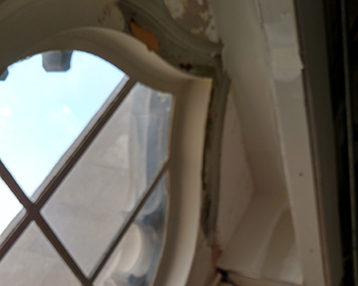 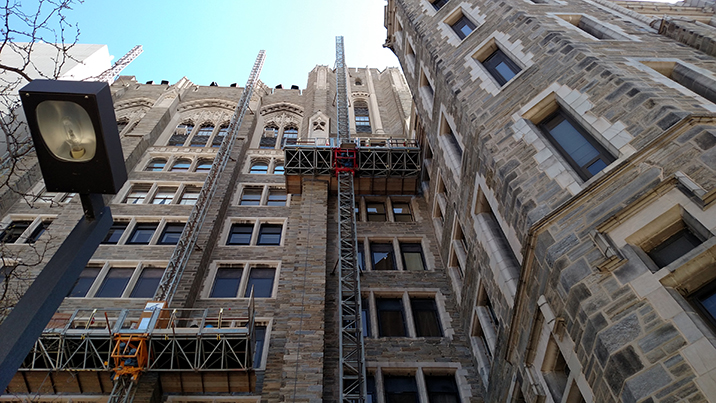 Above: Scaffolding is erected for commencement of facade restoration 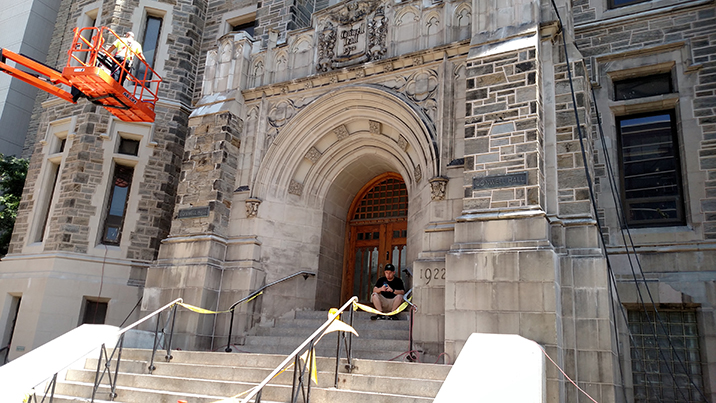 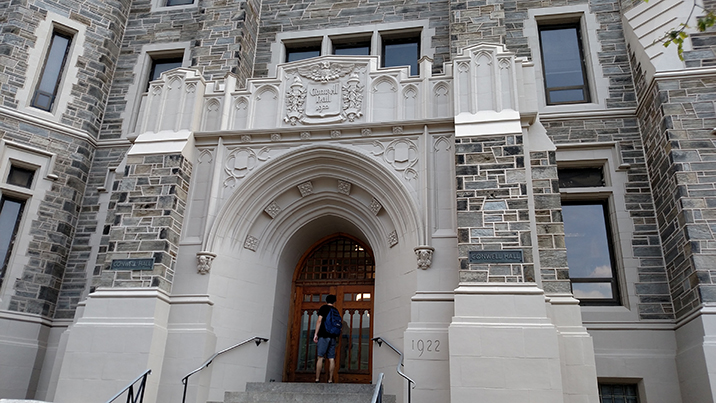 E.P. Guidi is honored to be part of the team restoring these two beautiful structures to their former historic elegance.  Our partners, Temple University, O’Donnell & Naccarato and Atkin Oshin Schade Architects, are exemplary colleagues, dedicated to this significant project.